History of the project

How the motorcycle with an enclosed cockpit was born Monoracer PERAVES CZ was founded in 2009 by Gustav Prochazka, CEO of BOHEMIA MOBIL, and Arnold Wagner, CEO of PERAVES in Switzerland. The main idea was to continue and expand cooperation in the development and production of motorcycles with a fully enclosed cockpit, which began to be produced by the Swiss company Peraves in 1987.

By 2009, around 90 Ecomobile versions of various types were produced, including two racing prototypes for one passenger. Since 2005, BOHEMIA MOBIL and PERAVES have designed and manufactured the first five MonoRacers. Many new Czech manufacturers have started to participate in the development of new MonoRacer components. Since December 2015 PERAVES CZ is the holder of the type approval certificate Nr. e8 * 2002 * 24 * 0015 * 00 for the petrol version of Monoracer. 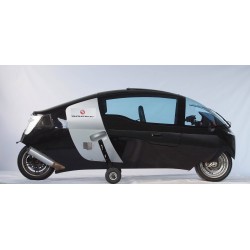 Brand: Peraves CZ
Closed electric motorcycle MonoRacer
The MonoRacer is a fully enclosed electric motorcycle that stands out above the rest of its competitors. With its unique design, advanced power and performance, this bike redefines what it means to ride a motorcycle. MonoRacer offers luxury, quality performance and one of the best motorcycles on the..
$96,000.00
Ex Tax:$96,000.00
Add to Cart
Add to Wish List Compare this Product
Buy Now Ask Question
Showing 1 to 1 of 1 (1 Pages)