WHAT IS MWE LABS?

The MWE (Modern Work Environment) laboratory began operations in Quebec in 2008. They began developing a prototype for an ideal gaming chair that was built with the scorpion's exoskeleton in mind. A year later, they open the Emperor 200 CES in Las Vegas. Skipping a few generations, finally in 2016 they introduce the Emperor XT gaming chair.

WHAT IS THE EMPEROR'S CHAIR?

The Emperor chair is the future of the high-tech home and office computing environment. With the emperor's signature scorpion outline and shape, it looks like something from recent Star Trek movies. With tilt capability, built-in sound, LED lighting, all inside an industrial-grade steel case.

Emperor functionality provides the user with unparalleled comfort and near-immersion in the world thanks to strategically placed accessories and monitors. The end result is a complete computer office optimized for ergonomics, with minimal footprint, which increases overall productivity and productivity.

The Emperor exists to improve the condition of any organization. It does this by creating a highly productive work environment in an efficient space without compromising personal well-being.

With incredible payload, eco-friendly standby and endless settings at your fingertips. The Emperor is ideal for people who expect the very best for themselves and their work. The up and down controls at the top can be used to enter and exit the Emperor and slide the monitors up or down. For added comfort, the Emperor can be tilted back and forth.

The chair itself is designed to withstand testing in observation rooms, control rooms and control centers. It is equipped with the latest components and commercial grade design. Its superior ergonomics promise to meet the demands of multi-shift, 24/7 operation.

CREATING A WORKING ENVIRONMENT SINCE 2008

The modern working environment laboratory started its work in 2008. In the first 12 months of operation, the main task of the MWE Lab was to further develop the project and prototype work started by Martin Carpentier on the original and innovative Emperor 200.

After a year of intense work and testing, the Emperor 200 was first shown to the public at CES 2009 in Las Vegas. Following the successful launch of Emperor 200 in January 2010, a second Emperor development project called Tiberian was launched, also led by designer Martin Carpentier. The result was Emperor 1510. 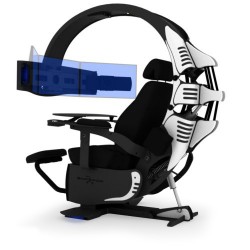 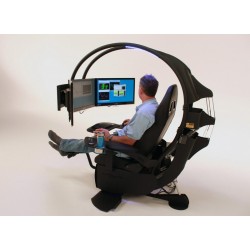