Startup Challenergy has developed the Magnus Vertical Axis Wind Turbine (VAWT) to tame the devastating winds. The Ministry of Land, Infrastructure, Transport and Tourism of Japan estimates that the energy from one major typhoon is equivalent to about 50 years of Japan's total electricity production. Instead of the traditional propellers used in wind turbines, Magnus is equipped with rotating cylinders that power a vertical-axis generator.

The technology is based on the Magnus effect, a physical phenomenon that occurs when a stream of liquid or gas flows around a rotating body. As a result, a force is generated that acts on the body and is directed perpendicular to the direction of the flow. Magnus has three cylinders that rotate around a vertical axis to generate power. The installation has already been tested in the city of Nanjo in Okinawa, Japan, where it withstood wind speeds of 225 km/h.

Vertical turbines, in comparison with traditional ones, are not as efficient, but even if they can convert at least part of the typhoon's energy, it will already be a success. After all, it is extremely dangerous to use conventional wind turbines during cyclones, their blades can be damaged. 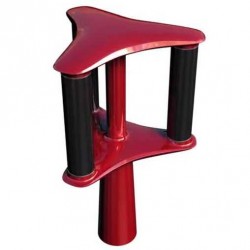 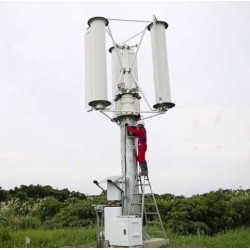